Totsukawa Farm was founded in 1999 with the hope of bringing to market healthy tea products.
Drinking tea is an integral part of the diet and daily life of Japanese people.
Nejime Biwacha is a healthy tea everyone from young children to the elderly can drink as much as they like at any time.
We do the best we can to make sure our products are safe and secure so that everyone can drink it like a pure, healthy water. 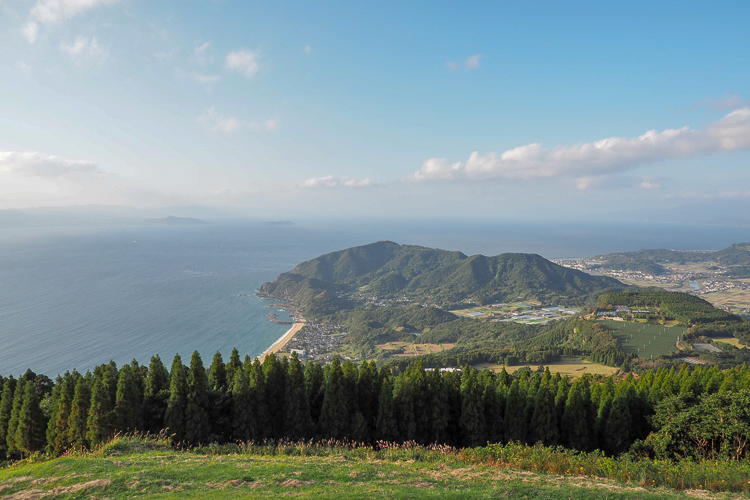 Nejime Biwacha is made from loquat leaves which grow healthily and abundantly in the soil of Kagoshima under the tropical sunlight and breezy atmosphere.

Our one-of-a-kind roasted loquat tea is produced in a patented process.
Enjoy the roasted flavor and mellow taste as it goes down refreshingly and smoothly.

We are glad that many customers describe it as positively addictive.

Our Loquat leaves are produced 100 percent in Kagoshima Prefecture 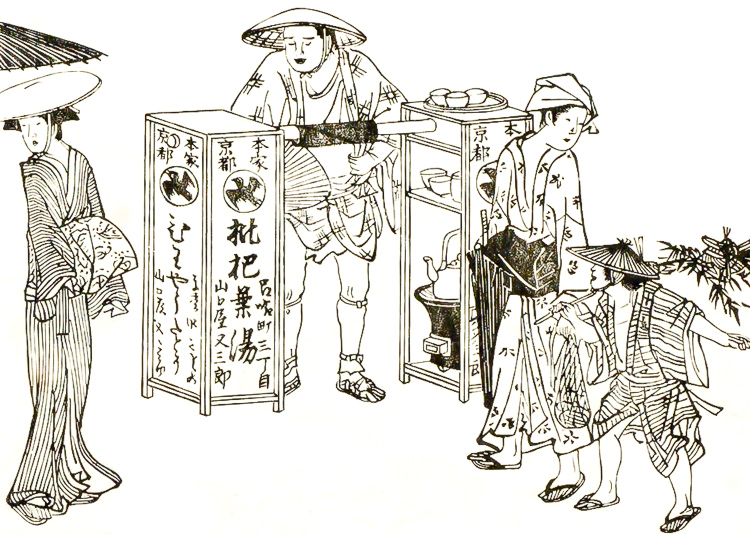 Loquat is an evergreen tree belonging to Eriobotrya japonica, Rosaceae, Rosales. Its fruits are edible, and the leaves are a precious herbal medicine.
Loquat originates in south-western China. It was brought to Japan in the 7th century when Buddhism was introduced to the country.

Loquat trees are referred to in old Buddhist scriptures as the ‘tree of the king’ and its leaves are called ‘Muyusen’ * because they heal anxiety.
The use of loquat tea began in China in the age of Han dynasty (circ. 1st century B.C.)

*Muyusen, literally “depression-repelling fan”, is a mythic leaf believed to cure any apprehension. 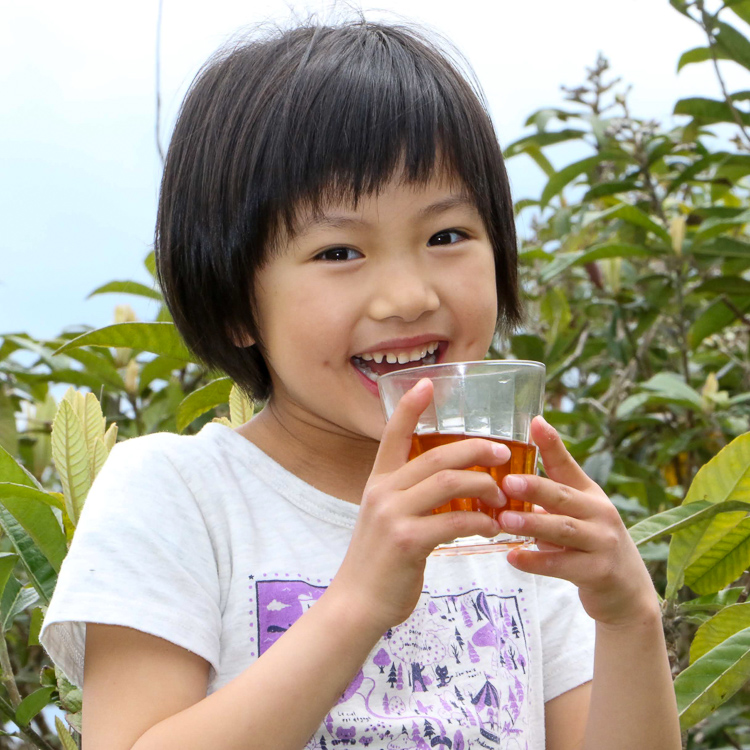 Totsukawa Farm is conducting research to apply for labelling as a functional food. 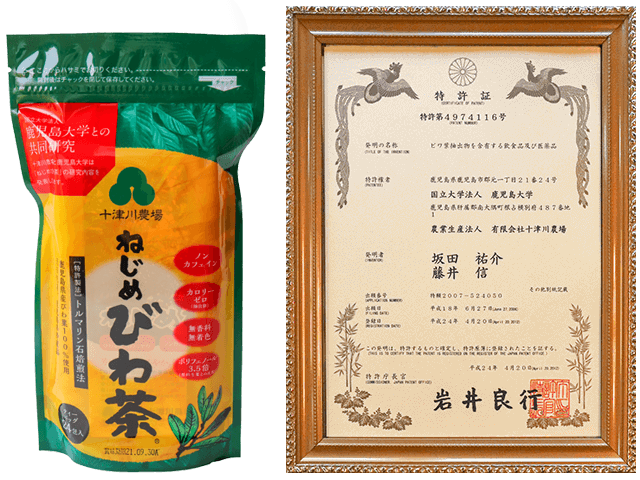 We have had words of thanks from our long-time customers, such as, ‘I smile more often these days’ and ‘I wish I had known about this tea earlier’.

The large number of positive customer reactions led us into joint research with Kagoshima University in 2004 to conduct research on the physiological function of Nejime Biwacha. The research results have been presented at scientific conferences. 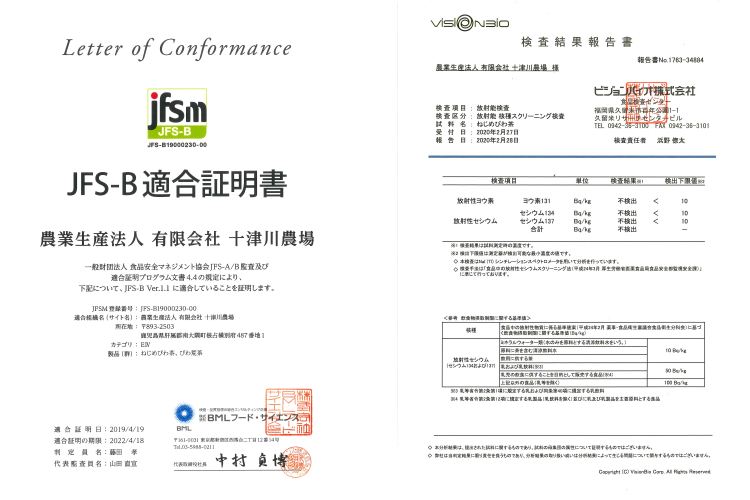 Our factory is certified with JFS-B, Japanese equivalent of HACCP.
Quality checks are done in the quality control room called the ‘clean room’.
Finished products packed in outer packages are checked again by metal detector for contamination.

Residue of agricultural chemicals (276 items), radiation (less than 10 Becquerel/Kg required by government) or amygdalin has never been detected in all the quality control checks. 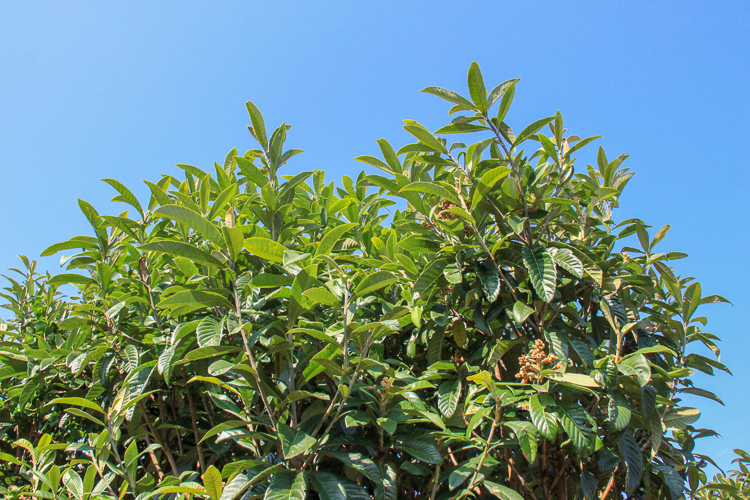 Blessed with mountains and oceans, the prefecture has many of the best of nature’s benefits, such as bright sunshine and a high-quality soil of volcanic origin.

We harvest only the well-grown leaves that are one year old or older. 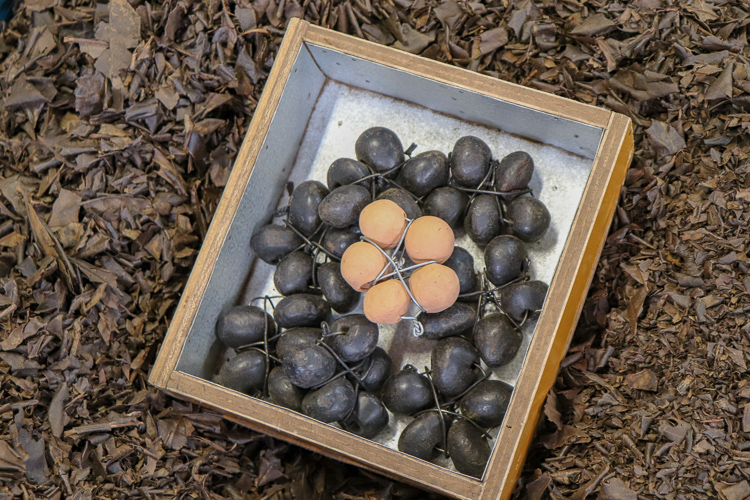 2. The patented process brings out the effective ingredients and unique taste of loquat leaves.

To rid harvested leaves of their harshness, they are soaked in water specially prepared in the water energizer we developed independently using layers of natural mineral pebbles.

They are dried under the sun to bring out a well-rounded taste, roasted at high temperatures and mellowed by tourmaline pebbles. Because floccus is thoroughly removed, the tea goes down refreshingly without leaving a trace of bitterness. 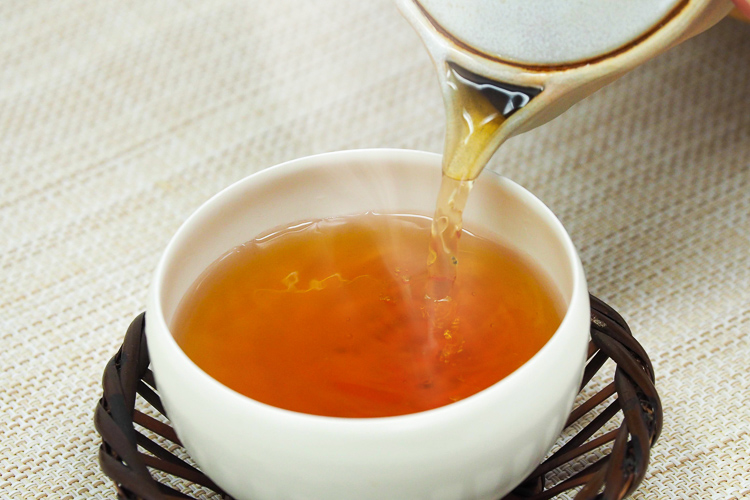 3. A great amount of time, work and care go into the production.

Considerable amounts of time, work and care go into the production.

The fragrance-free, coloring-free tea is packed in unbleached tea bags.

Procurement and maintenance of loquat leaves

Cleaning and removal of harshness

Depending on the weather and season, it takes about two to three days to dry the leaves out under the sun, ensuring the natural mellow taste unfolds into the tea leaves.
The next step is machine drying in which floccus is removed thoroughly along with the bitterness.

Leaves are roasted at high temperatures using tourmaline-coated ceramics.
Only the master roaster knows when to stop before the process is overdone to bring out the best of flavor and all useful ingredients.

Only unbleached tea bags are used. Tea bags are packed in outer packages.
Each and every tea bag is inspected visually to make sure they are in an appropriate condition.

You can enjoy Nejime Biwacha all year round. It tastes good either hot or iced.
Make tea with freshly boiled water and enjoy the healing and relaxing flavor. 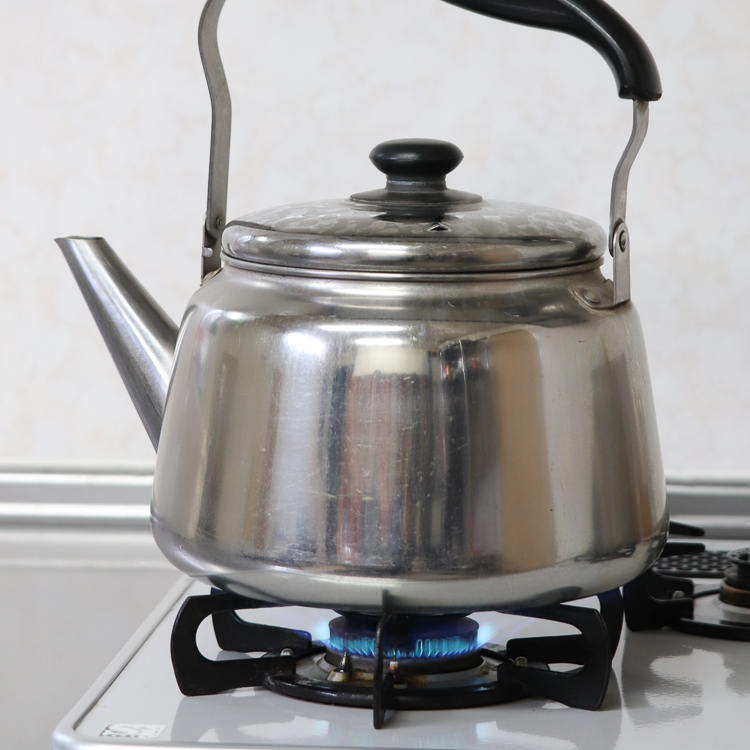 If you boil the tea to extract ingredients

Put one liter of water and a tea bag (or 2g of tea leaves) in a kettle.

Bring to boil and simmer over low heat for 10 to 15 minutes.

Do not take the tea bag or tea leaves out until cooling down has completed.

This way, a stronger tea can be had. 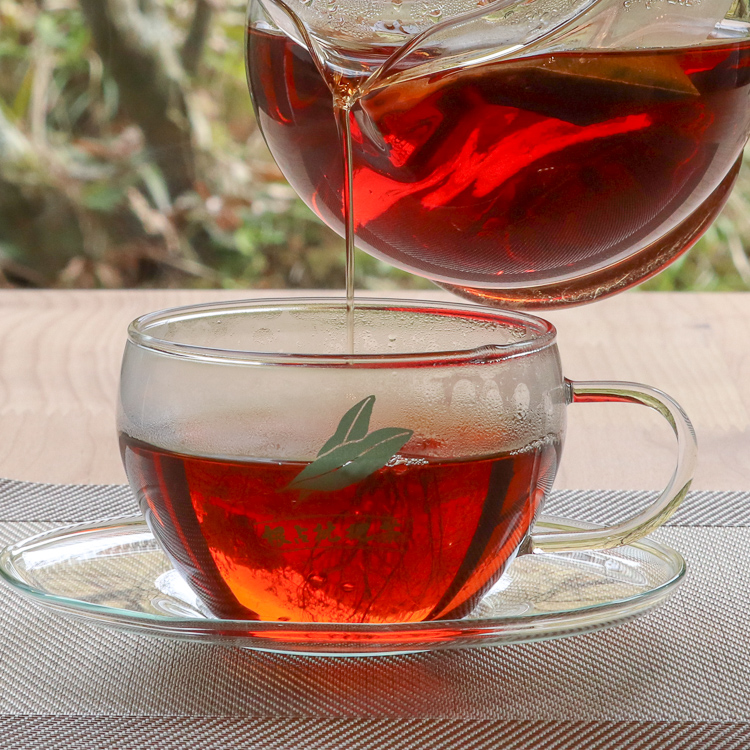 If you use a teapot

Let stand for about three minutes. 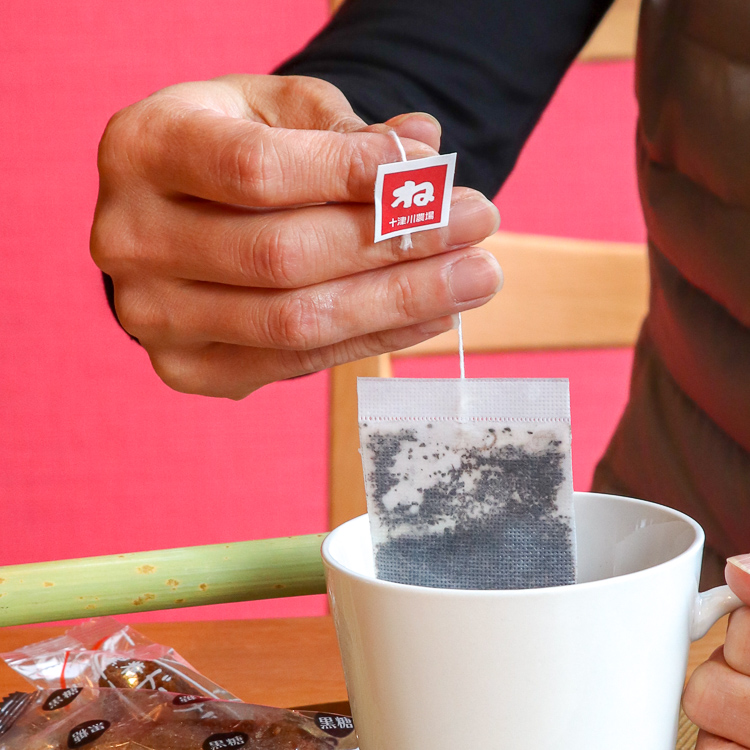 Put a tea bag in a mug cup or thermo mug and pour in 250mL of boiling water.

Nejime Biwacha not only makes a tasty tea but also makes dishes tastier♪
Use Nejime Biwacha instead of water to enhance the flavor of all your favorite dishes.
For example, the taste of meat and fish becomes lighter when cooked with Nejime Biwacha.

Use Nejime Biwacha instead of soup stock, and you will enjoy a harshness-free, clean-tasting hot pot! 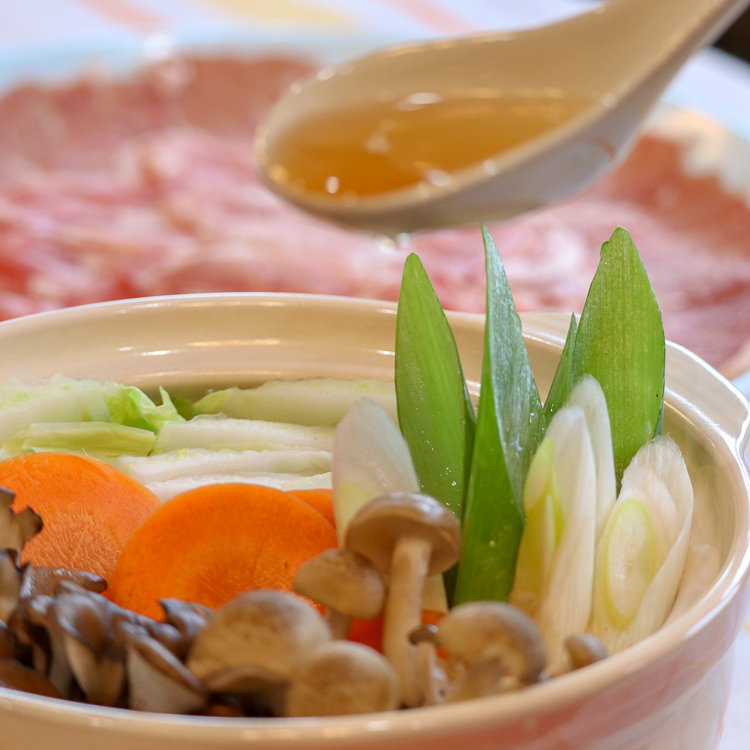 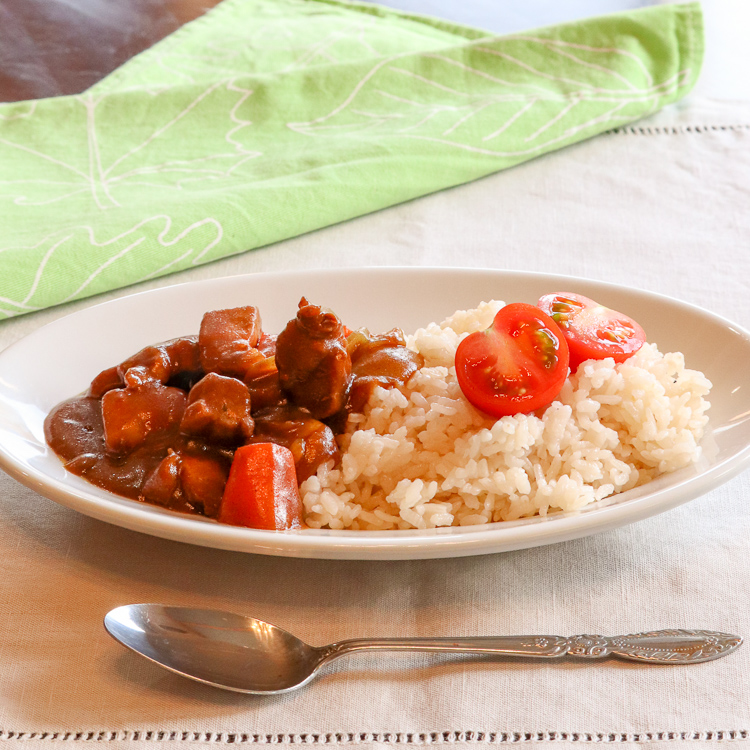